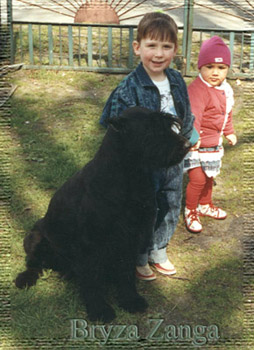 It was over twenty years ago that I became fascinated with the Giant Schnauzer breed.
It happened when my friend's parents bought a dog and for the first time I saw a Schnauzer close up.
None of the dogs that I had before has ever raved me so much. There weren't many of the Giant Schnauzer breeding at the time. When I decided to buy a puppy, it turned out it wasn't so easy after all.
I found a kennel "Z Tartaku" (Joanna Frycze). There, I received information about all the puppies being already ordered. Ms Frycze told me about another dog breeder, who also happened to live in Łodz(PL) where they had puppies born lately. The owner of this kennel was Ms Grazyna Olejniczak. The only puppy she had left form the whole litter to sell, was one bitch - BRYZA Zanga born on the 28.10.1984. It was my first black Giant Schnauzer. She kept me company for 10 years. She was special, of a typical utile character. Her devotion to me and my family knew no boundaries. Her perfect characteristic traits were passed onto the next generations. 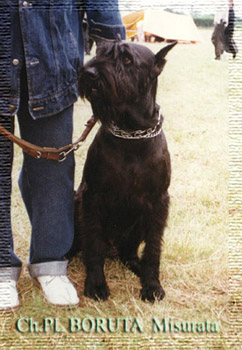 A perfect example of that can be the son of BRYZA, the unforgettable BORUTA Misurata. He has achieved a 3rd degree in Defence Training. On the show rings he was also highly appraised for his excellent exterier. Soon, he received a Junior Champion of Poland and shortly after this he was awarded a Champion of Poland. He's a distinguished dog in every way. The next Giant Schnauzer dog I have purchased was ZORZA Nanda Devi, form Ms Irena Krassowska from Warsaw in 1994. She ushered a new line in my breeding. She was an exquisite show dog. Thanks to her fatastic results I got bitten by the show bug. I have also decided to learn how to crop and trim my dogs, getting them ready for the shows.

My adventure with the Miniature Schnauzer began with a bitch called BAJKA, whom I got by an accident. Visiting her owner, I found out that she decided to put her down due to her aggressive bahaviour caused by her loss of sight. She was only a couple of years old, and because I felt sorry for her, I decided to give her a chance. Bajka moved in with me. Adequate treating caused her to become more and more relaxed and peaceful. She let me crop her and even let herself be handled by my then little daughter Lina, in a Junior Handling competition. Unfortunately, the illness was taking over and led to a complete loss of vision and smelling sense. BAJKA spent three really happy years with us. After her loss, I decided to buy another bitch, a black Miniature Schnauzer. 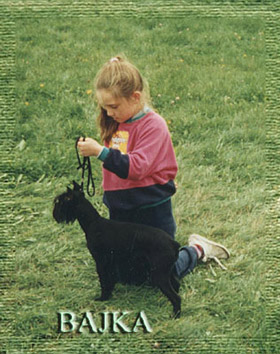 I collected her from a Czech kennel "Androis" from Ms Andrea Horakova. QUELLEY CANTA Androis had a distinguished origin, and gave rise to my black Miniature Schnauzer breeding. She was always bred with the best stud dogs. She gave birth to excellent puppies. She was beloved, the most faithful and devoted miniature in the midst of all that I have.
In conclusion I would just like to add that I cannot state which of the breeds is closer to my heart. I am not able to put them apart. Both have many unique characteristic traits. They are different, despite their similar appearance. Giant is a fearless defender and guardian, Miniature bravely helps him out being a cuddly dog- toy at the same time. The collation of these two breeds caused them to complete each other. Walking together in a group, they look impressive. I always tied my life to schanauzers, I treat them like my own children and provide them with the best conditions. The puppies form my kennel can only reach suitable hands. The person who wishes to recieve a dog from my kennel must fulfil many conditions for me to decided to sell one. Dog breeding is an occupation full of renunciations and expectations from a dog breeder, such as knowledge, amazing patience- sometimes extraordinarly stressing. But when in return we achieve success in shows and a selfless love from our dogs, all the negative feelings disappear and we're left with immense happiness giving us the strenght for the following years of hard work.

Giant schnauzers from my breeding with the title of Champion: